Software projects are an iterative process. Tests, linting, and even deployment should occur at every step of that iteration. One can make such tasks much easier with task runners like Grunt or Gulp, but the burden of remembering to do it still lies on the individual. That's where Continuous Integration comes in handy.

Continuous Integration services like Travis CI, Circle, and Jenkins provide a way for projects to automatically run certain tasks on each commit or pull request to a project. Typically, CI is used to run a suite of tests defined by the project and then deploy if all the tests pass.

My experience lies in Travis CI, though Circle should be equally easy to set up. There are some nuances to setting up Travis, though, which I'll cover in this post.

Table of Contents generated with DocToc

It's free for public repos on GitHub, costs you a lot for private repos. I'm assuming you're working with a public GitHub repo.

It's just that easy.

Not that easy? Let's troubleshoot.

You may need to sync your GitHub repos if it's not showing up.

If you're part of an organization and the organization's repo is not showing up, you probably aren't publicizing your membership.

Go to GitHub settings for the organization...

The default settings should work for most use cases. 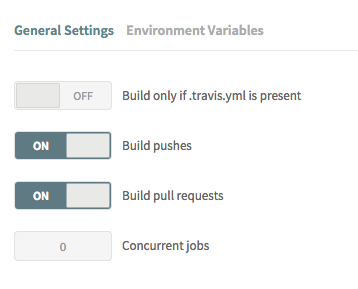 If you have environment variables in your application, set them on the tab "Environment Variables" under settings. 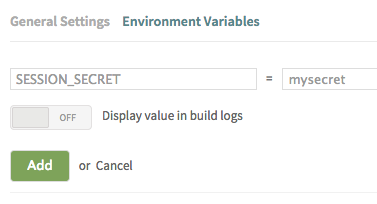 There are other ways to set environment variables, this just happens to be the simplest way.

Here's a basic rundown of what Travis does:

You communicate special instructions to Travis CI by a .travis.yml file, which lives in the root directory of your project. Here's a basic version for a Node project:

Assuming for the moment that tests are already set up, Travis CI will communicate the status of its build on a particular commit inside of GitHub:

Travis status communicates to the rest of the team about how well your code "integrates" with the existing code base. Does it pass a linting check? Does it break other project features? Travis automates all of that and takes the burden of checking off the individual.

4. Setting up your tests

Like most tasks in programming, there are many ways to accomplish this task. The basic idea is have your npm test command do something meaningful. You set this command inside package.json:

It could be something else, like a command-line call to mocha or karma, but given my love for automation, I've placed all these tasks inside my gulp test task.

Depending on your dependencies, you may run into obscure errors during npm install on Travis. This may occur because Travis CI uses version 1.4 of npm. You can tell Travis to manually upgrade npm before running the install inside your .travis.yml file:

If you're running client-side tests, e.g. with Karma, a browser is required. Initially, I set Karma to use Chrome. Turns out that Travis doesn't have a Chrome binary file, so it can't exactly launch the browser inside the Travis environment. Your options are to switch to Firefox, which is provided by Travis, or Phantom, which is headless. If you want to stick with Chrome like me, here's how you adjust your Karma config file:

Then, add this additional configuration in .travis.yml:

7. Getting Mocha tests from Gulp to work in Travis

This is a specific troubleshooting case, focusing on mocha tests run through gulp in the Travis environment.

There's something funky about mocha tests where sometimes it doesn't exit properly from the task. You run gulp mocha, it runs all the tasks, but it doesn't exit; it hangs there, doing nothing, and you have to hit ^ + C to escape. That's fine on your local machine, but it won't work for Travis: there's no place to hit ^ + C there. Here we'll learn how to do it (sort of) from within gulp.

With Node, you can force a task to exit with process.exit(). You can also pass a result from the process: process.exit(1). If you pass something along, e.g. 1, it means an error occurred. Otherwise, all is well.

Taking this functionality, you can give a swift kick to gulp mocha once it's finished. More comments are inline to help parse the information.

They'll spam your inbox into oblivion. Get rid of them this way in your .travis.yml file:

I'm assuming you already have Heroku set up on your repo. If you don't, do that first.

Here you'll need the Travis CLI tool. It's a Ruby gem, so make sure you can work with those. Instructions to install the tool are here.

Once done, type into your terminal:

It will magically add some details to your .travis.yml file that will allow Travis to communicate with Heroku. All the information is encrypted, so you don't need to worry about ne'er-do-wells gaining access to your Heroku app.

Travis only deploys to Heroku on a successful build (i.e. it runs git push heroku from its current build). You can tell Travis to only deploy from a specific branch, e.g. master:

You can, as usual, customize further.

Check out my tutorial on setting up Coveralls for details.

I spent much of my first group project at HackReactor, known as the Greenfield project, on project deployment, automation, and testing. You can learn a lot by hunting around the setup here.

As usual, this post only scratches the surface of what Travis can do. If you think of something you want, it's likely possible.

Get stuck on your setup? Let me know and I'll try to help!

Gulp. Without understanding how it works, reading the file can make programmers perform its namesake. (Still, it's better than the equivalent for Grunt. Oh snap!) Gulp automates tasks. From minifying JavaScript to injecting vendor dependencies into your template index.html file, Gulp offers a